Coaches: Are You Adding Value?

Recently, Mark O’Sullivan and James Vaughan attended the ICCE (International council for coaching excellence) conference in Liverpool to talk about the approaches of AIK Football Club and Player Development Project. Before the conference kicked off on Monday they spent the weekend at the research fair listening to some of the world’s leading academics in the field of Sport Coaching. What follows is a combination of their notes and ideas.

How many times have we heard this…especially in our most important relationships? From siblings to ‘sambos’ (that’s Swedish for couples who live together) we experience this nuanced – yet simultaneously obvious – communication strategy in all aspects of life. We think our words hide our true feelings and intentions, but they don’t.

This recognition led Karl Erickson and Jean Còte to investigate the influence of interventional tone on athlete development in their paper ‘A season long evaluation of the interventional tone of coach-athlete development in youth sport’. This research takes self-determination theory (SDT) and achievement goal theory (AGT) off the bookshelves and into the real world by looking at athletes and coaches in real life situations.

In Liverpool at the ICCE research fair we were lucky enough to see Erickson and Còte present on this work. They discussed how a difference in the tone of feedback experienced by athletes was seen to influence development trajectories of those athletes over the course of the season.

Jean Còte began by asking us some important questions with regard to interpersonal coaching behaviours.

In order to design effective coach development programs, it is crucial that researchers and practitioners have a thorough understanding of: 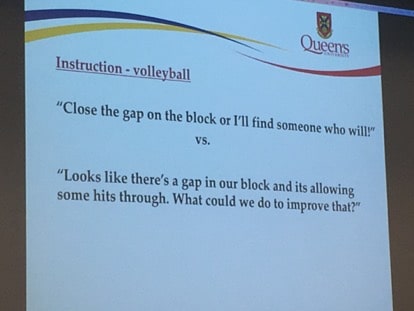 In this example of instructional coach feedback, SDT and AGT can be used to suggest the psychological influence on athletes. The top comment can be described as controlling, promoting an ego orientation in athletes. The bottom comment, meanwhile, can be seen as more autonomy supportive with an emphasis on task mastery. However, it’s the athlete’s experiences and perceptions of these comments that influence their development, not our theoretical interpretations.

To understand athlete development and capture their perspectives over the course of the season the ‘4 Cs’ were measured at key intervals using the questionnaires below: 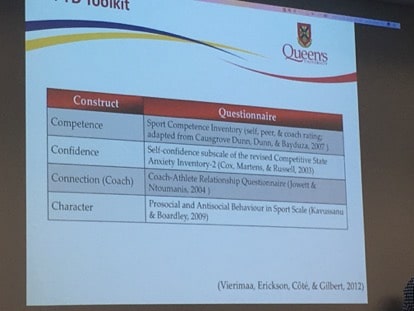 Over the season, three groups of athletes emerged from the results. The differences between these groups are described below

1. The group with a development trajectory described as ‘low and decreasing’ experienced:

2. The group with a development trajectory described as ‘high and increasing’ experienced:

3. The group of athletes with a development trajectory described as moderate and maintaining received no distinguishing interaction profile. 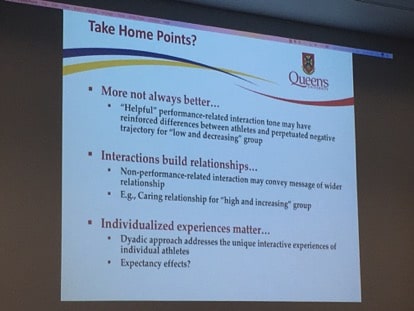 Before we coaches offer up any ‘gems of wisdom’ or spend extra time with little (or big) Jenny so ‘she doesn’t fall behind’, we might need to consider that we may be doing more harm than good. Jenny’s learning journey is non-linear and perhaps the last thing she wants is to be singled out for ‘helpful performance related’ instruction when she just wants to feel part of the group.

The take-homes can be surmised as:

This research provides more evidence to support the perspective that effective coaches see the players as people first and foremost and then embody this perspective in the eyes of their athletes.

Unfortunately, the motivational climate caused by player commoditisation at the top of the sports is replicated in development programmes, academies and sporting organisations. Academies see products not people, while elite grass roots coaching programs are promoted by federations (link). The neo-liberal worldview has turned top-level sport into a game of monopoly and the emergent features of this game are choking the life out of the grassroots. We need to create better environments for our coaches and our children before there are none left.

For too long children have been hammered into adult systems that are founded in western neo-liberal world-views and built on ignorant ideals of carrots and sticks, machine metaphors and market forces. Sport is suffering but sport can also be a system of influence, leading change. This is the goal at AIK Football Club in Stockholm, where the club has recognised the out-of-control commoditisation of players and the performance anxiety it fosters at earlier and earlier ages and has pushed back. As talent identification professionals are beginning to gaze around the kindergarten for the next ‘wonder-kid’, AIK have delayed selection into their academy until players are ready to choose for themselves to be part of the U13’s academy team.

James Vaughan is a Co-founder of Player Development Project and currently based in Stockholm where he is coaching at AIK and working towards his PhD in Creativity & Motivation in Football.

Mark O’Sullivan is a UEFA A licensed coach based in Stockholm, Sweden. Mark works at top Swedish club AIK as coach and player developer. He also delivers coach education courses for the Swedish FA and has run many youth social projects He has his own blog, 'Footblogball' and also works with Espanyol Football a co-operation with La Liga club, RCD Espanyol. Mark is a regular contributor to Player Development Project.