Watch the world flow by like a river in which the exact contents of the water are never the same. The more unaware of this complexity, the more reductionist the produced about it.

A major factor that influences all performers [at all levels] throughout their sporting careers is the quality and appropriateness of the coaching environment (Martindale et al., 2005, p.353). Against the background of significant concerns about the quality and appropriateness of the contemporary youth sport experience the International Olympic Committee (IOC) recently presented a critical evaluation of the current state of science and practice of youth athlete development.

Despite the research literature on athlete development being generally more humanistic and developmentally orientated (e.g. Côté & Lidor, 2013a) there is continuing emergence of non-flexible programmes promoting early talent identification and specialisation often characterised by selection and deselection through all ages and stages (Güllich, A., 2013) with a clear absence of critical thinking. We may know what we are looking for but do we understand what we are looking at? There is a fundamental flaw in any youth sports system that does not take into account the complexity and non-linearity of human development. For example; sub-systems of the human body develop at different levels and may act as rate limiters on performance (e.g., psychological (Collins & MacNamara, 2012), and social development (Deci & Ryan, 2000).

There is increasing acceptance that individual differences among learners need to be accounted for when coaches plan teaching interventions in any learning contexts (Chow & Atencio, 2012). Learning a sports skill is a complex process that involves a multitude of factors. At the level of the learner, every individual is unique with differences in characteristics such as genetic composition, socio-economic backgrounds, prior experiences (Thelen E, Smith LB, Karmiloff-Smith A, Johnson MH (1994). For the young learner, the game, learning the game and the culture of the game is a continuum of complexity. “The coach needs to understand the game but also other aspects that surround the game. The surrounding environment, society, culture, economy” – Joan Vila (Head of Methodology, FC Barcelona).

In this respect, talent is not defined by a young athlete’s fixed set of genetic or acquired components, but should be understood as a dynamically varying relationship captured by the constraints imposed by the tasks experienced, the physical and social environment, and the personal resources of a performer (Araújo & Davids, 2011).

Clearly there is a need for a model and principles that reflect the needs and meets the desire to create a holistic understanding of the sports coaching process and a fuller understanding of its complexity (Jones et al., 2002; Trudel and Gilbert, 2006). Since 1994, a constraints-based framework, (incorporating key ideas from ecological psychology, dynamical systems theory, evolutionary biology and the complexity sciences), has informed the way that many sport scientists seek to understand performance, learning design and the development of expertise and talent in sport (Davids, Handford & Williams, 1994; Williams, Davids & Williams, 1999; Davids et al., 2006; Araújo, & Davids, 2011b; Passos et al., 2016; Seifert et al., 2014).

An important feature of the contribution of the constraints-based framework to enhancing understanding of theory and application in the acquisition of skill and expertise in sport is a focus on enhancing the quality of practice in developmental and elite sport (Chow et al., 2016).

A key challenge for coaches is to cater for this abundance of individual characteristics during practice. Therefore, nonlinear pedagogy (grounded in the constraints-led approach) is particularly appealing in that it underpins a learner centred approach and the emergence of skills (Renshaw., 2012). Non-linear pedagogy provides an appropriate framework for practitioners to cater for individual complexities and dynamic learning environments (Lee, M. C., Chow, J. Y., Komar, J., Tan, C. W., & Button, C.,2014). Training should be designed to encourage the interaction of the different capacities and systems of the young player to help them learn to adapt and develop the ability to learn how to organise their capacities and structures. Seirullo (2002) refers to as this type of training design as “prioritised” rather than as a “hierarchy.” where the young learner is a participant in the learning process as opposed to being a recipient. England Rugby coach Eddie Jones in a recent interview with the Telegraph newspaper makes a reference to this – “Professional sport to a large extent is educating players to be a recipient and it’s our great belief that to be a World Cup-winning team you need to be a participant.”

Mercé et al. (2007) suggested that football be understood as a “situational sport”. The dynamic of the game comes from unstable situations and big uncertainty caused by teammate’s and opponent behaviours, path of the ball, environment, etc. It is characterised by individual and collective decision making where the player/team adapts performance to each punctual moment. The emerging relationships with teammates and interaction with opponents develops an interesting dialogue (co-adaptability/interdependence) and an astute coach will observe, reflect and use this dialogue to design a learning space. The learning environment should offer possibilities for “football interactions”  to the young player independent of their changing abilities needs and concerns. 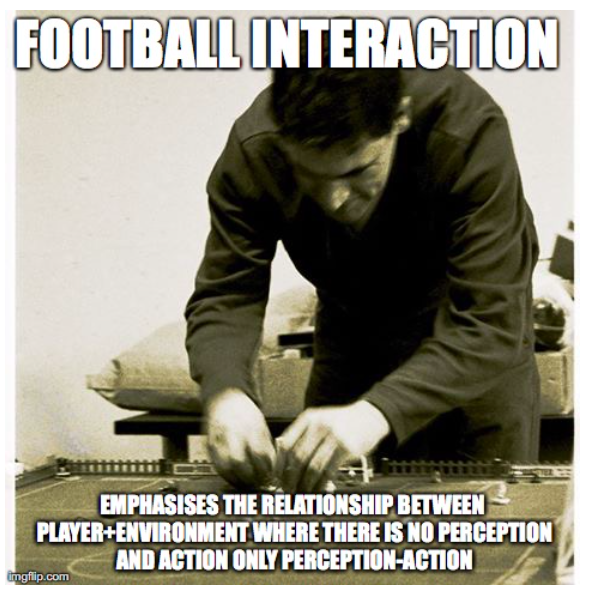 However, sports coaching research “needs to extend its physical and intellectual boundaries” (Potrac et al., 2007, p.34). There is a limited amount of research undertaken in the integration of theory, science & knowledge from the perspective of high quality applied practice in sport.

This theory- practice gap possibly can be attributed to: “the professional wants new solutions to operational problems while the researcher seeks new knowledge” (Bates, 2002b, p.404). We can refine the literature by accessing the ‘often missing voice’, those whose job it is to implement the ‘theoretical’ models into ‘live’ programmes; i.e., the coaches. Coaches’ experiential knowledge can provide insights beyond those found in traditional empirical research studies. The integration of experiential knowledge of coaches with theoretically driven empirical knowledge represents a promising avenue to drive future applied science research and pedagogical practice (Greenwood, Davids, & Renshaw, 2013).

Coaches who are willing to share their evidence-based practice will improve the quality of practical and applied work in sport. We need to recognise that we probably do not know as much as we think and there is a need to facilitate a space for exchange and learning in a community of practitioners and researchers in order to develop understanding and knowledge and propose improvements for the constructive transformation and evolution of both the coaching environment (practice and coach education) and the literature.

Mark O’Sullivan is a UEFA A licensed coach based in Stockholm, Sweden. Mark works at top Swedish club AIK as coach and player developer. He also delivers coach education courses for the Swedish FA and has run many youth social projects He has his own blog, 'Footblogball' and also works with Espanyol Football a co-operation with La Liga club, RCD Espanyol. Mark is a regular contributor to Player Development Project.

Photo by George Doumani on Unsplash