On the 31st May 2018, MWFA teamed up with Football Federation Australia and our close neighbours Northern Suburbs Football Association for the mid year review and training workshop for CCC’s and coach developers. 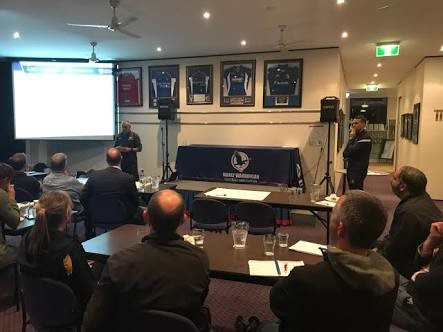 The evening saw 25 CCC’s and coach developers from across both associations descend to Cromer Park for a night of learning and networking alongside National Community Coach Development Manager Les Bee, MWFA Community Coach Development Manager Chris Adams and NSFA Community Football Manager Ed Ferguson. The CCC program is a key priority for both associations to empower member clubs to take ownership of coach development and support their many volunteer grassroots coaches in their club environment with a “Where they are, When they are” approach to coach development.

The CCC program is in its second year across the Northern Beaches with further growth seen with new clubs joining the program following the successful pilot of the program in 2017. The evening workshop saw CCC’s facilitate a live CCC session with a grassroots coach from Beacon Hill being supported by Beacon Hill FC CCC Stuart Matters. “For me as a CCC it was great to get some support and further practice at mentoring coaches in a live environment and the opportunity to receive feedback from Les was fantastic, the CCC program is starting to come to life at Beacon Hill FC and from tonight I am looking forward to the future growth of the program”

The evening then concluded with a networking session where community clubs were placed in groups with different clubs with the focus being around how they have brought the CCC program to life at their club, the success stories that they have, the challenges they have faced and how they have overcame them. The final key outcome for the night was for CCCs to draft a “Coaching Checklist” as to what good coaching looks like at their club. This document will then be developed with the CCC’s and their club committees to form the framework for coaching at their club and how they then bring that to life to support their grassroots coaches. Brett Jager the CCC from NSFA club Lane Cove FC heaped praise on the opportunity to be able to meet and share with fellow community clubs “it was good to meet again with other CCC’s to hear how their plans are growing and what has and hasn't worked so far. It was clear that there has been good progress and that each club will have their own approach which works best for its members. Some great ideas were shared about surveying the coaches to find out what they are looking for from the club in terms of coach support along with cultivating a mini community of coaches through social functions at the start and beginning of the year to share ideas and support each other”

NSFA’s Ed Ferguson spoke highly of the second joint event that the two associations have ran in conjunction with each other “Something we don’t do enough of in Australian football is share. Opportunities such as these are few and far between, and I know that myself and all those in attendance would walk away with a new idea or approach to support coach development and ultimately our players football experience. It’s been great working alongside Chris and the MWFA team. I look forward to seeing the relationship continue and expand as more clubs and association become involved in the CCC program”

For more information on the FFA CCC program, click here.