Football Australia, through the Coach Education system, provides opportunities for coaches to acquire knowledge, share experiences and gain accreditation in various coaching pathways. This is primarily in outdoor football at the levels of ‘C’, ‘B’, ‘A' and Pro Diploma but also in pathways specific to both Goalkeeping and Futsal.

Please see below for more information on our coaching pathways and should you know which course you would like to undertake, you can head to our 'Find a Course' page HERE which lists all our upcoming coaching courses across the country.

Football Australia is a member of the Asian Football Confederation and follows the Coaching Convention guidelines established by AFC. When a coach attains accreditation, a licence Is issued which is valid for a period of 3 years. To renew the licence a coach has to accrue 100 points during the next 3 year period, which can be done in a variety of ways.

The chart below shows the course structure under the AFC. 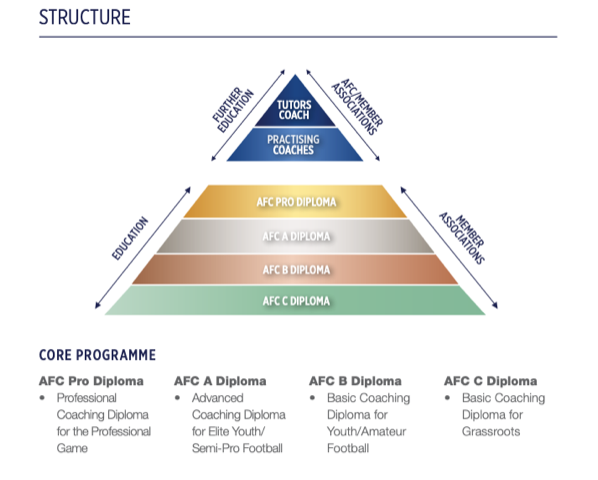 Football Australia 'C'  Licence:
The main focus of the required coaching competency on the ‘C’ Licence is on the technical aspects of the game, which includes teaching the techniques of passing, receiving, striking the ball and running with the ball, along with defending techniques to regain possession. The required technical knowledge will be supported with an understanding of The Principles of Play and the fundamentals of coaching. Participants will be introduced to the concept of teaching behaviour in different types of practice methods as part of the education program, but also to provide insight into the ‘B’ Licence. The ‘C’ Licence is a minimum of 60 hours in duration and may be delivered in a variety of ways to suit local conditions, with a combination of on-line and or face to face contact over a period of several weeks or months.

Football Australia/AFC 'B' Licence:
The  focus of the required coaching competency on the ‘B’ Licence is on the technical - tactical aspect of teaching players how to use the techniques in a small sided game, to score and how to prevent goals when the opponents have the ball. How players do that Is referred to as ‘playing the game’, which is when players in attack combine in small groups to keep possession and get closer to the opponent’s goal, and how they prevent opponent’s from doing that when they are defending. This may also be described as teaching players how to apply The Principles of Play, including transitioning from attack to defence and vice versa, the tactical relationship between the players and the lines and playing in zones, based on tactical understanding. Participants will be exposed to other forms of practice, to involve a squad of players to provide insight into the ‘A’ Licence. The ‘B’ Licence is a minimum of 120 hours in duration and will be delivered mostly in blocks of 2-3 or 4 days, on-line and face to face over a period of 6-12 months.

Football Australia/AFC 'A' Licence:
The focus of the coaching competency on the ‘A’ Licence is on the collective tactical aspect of teaching players how to apply the Principles of Play. This is usually referred to as ‘systems of play’ and / or a 'style of play’ and involves teaching players in ’the big picture’. There is more emphasis on analysing effective ways of attacking and defending and teaching player behaviours in practices involving the whole squad and in games ranging from 9v9 to 11v11. The ‘A’ Licence is a minimum of 180 hours in duration and will be delivered mostly in blocks of 2-3 or 4 days, on-line and face to face over a period of 6-12 months.

Football Australia Level 1 GK Licence:
7 day course involved pre, during and post course tasks. Consists of 2 days generic ( Part 1 ) C Licence and 5 days goalkeeper course. The course focuses on introducing key processes around how to analyse football, plan/prepare training sessions, conduct training and evaluate. These processes focus on the coaches understanding of, and ability to bring to life Football Australia's Vision and Philosophy, therefore covering the Football Coaching Process and National Curriculum in detail in regard to the goalkeeper.

These processes focus on the coaches understanding of Skill acquisition and Game training  involving primarily 2 to 4 goalkeepers. Game sense approach involving Perception/Decision Making and Execution with particular emphasis on Technique Execution. Role of the goalkeeper and goalkeeper coach and talent Id. Mock practice on course and instructor led model sessions.

Football Australia Level 2 GK Licence:
6 day course involved pre, during ( group presentations )and post course tasks. The course focuses on introducing key processes around how to analyse football, plan/prepare training sessions, conduct training and evaluate. These processes focus on the coaches understanding of, and ability to bring to life Football Australia's Vision and Philosophy, therefore covering the Football Coaching Process and National Curriculum in detail in regard to the goalkeeper.

The course has a heavy focus on leadership as Head of goalkeeping, both on and off the field., Detailed analysis, profiling goalkeepers, periodisation, fitness testing, set plays and physical and mental preparation of the goalkeeper in preparation of being a professional goalkeeper coach. Use of modern technology is utilised with expert facillators instructing on course. The course has been designed based on the UEFA GK  A Licence .

AFC Futsal Level 1:
6 day course being the entry point for Futsal coaches. The course has a focus on the development of players individual technique and tactics, an introduction to dualities and transition.  The AFC coaching process and methodology are introduced, with both instructor and participant led practical sessions. Participants are required to successfully demonstrate an understanding of the coaching process and methodology in an on course practical, as well as a dissertation.

AFC Futsal Level 2:
The AFC Futsal level 2 course is a 7 day course with a focus on dualities and groups of 3 within the game. The level 2 course expands on concepts of training the individual players role within group situations,  transitional play, Goal Keeper techniques, set plays and an understanding of the physiological aspects of players and the effects of training. Participants are required to demonstrate understanding through two practicals.

Visit our Find a Course page HERE to view all our upcoming advanced courses.

Majority of the ‘C’ Licence courses are run by their respective State Member Federation, and can be located through the above instructions, and narrowing down by State. Additionally, visiting their respective websites will also provide you with the relevant information.

Registrations for all Advanced Coaching Courses close one month prior to the course commencement date. Late applications may be considered if there is availability. A late fee of up-to 10% may be applicable.

For any questions regarding the Advanced Coaching Courses/Pathway, please email technical@footballaustralia.com.au with your inquiry. 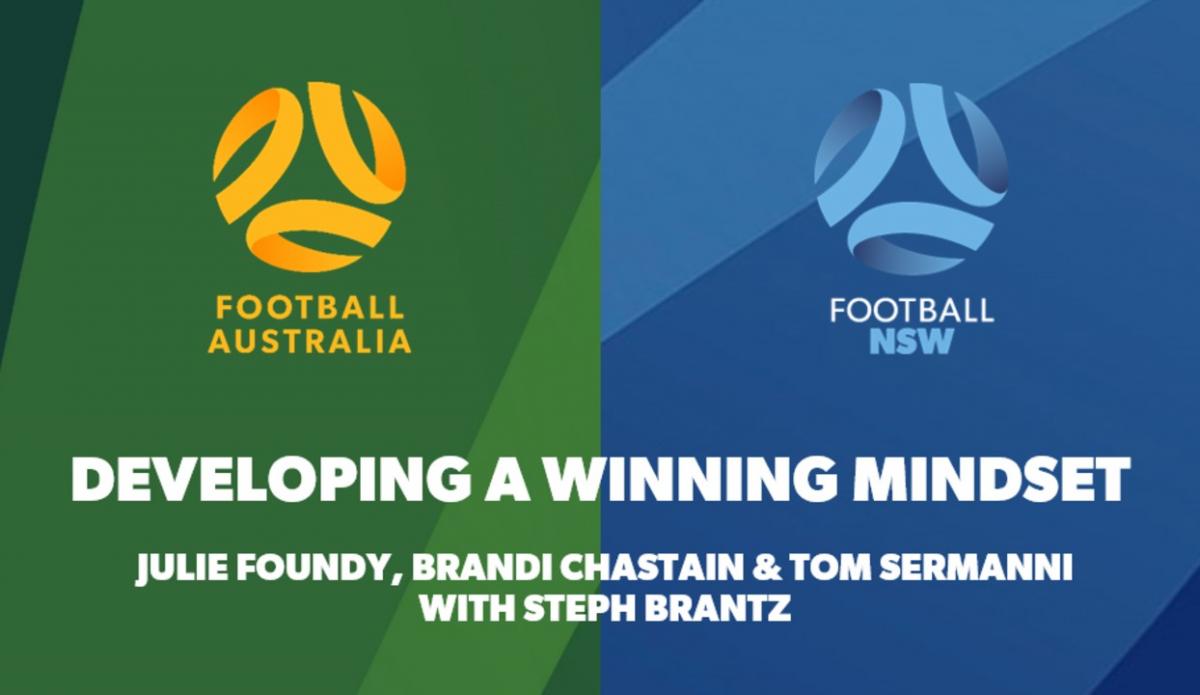 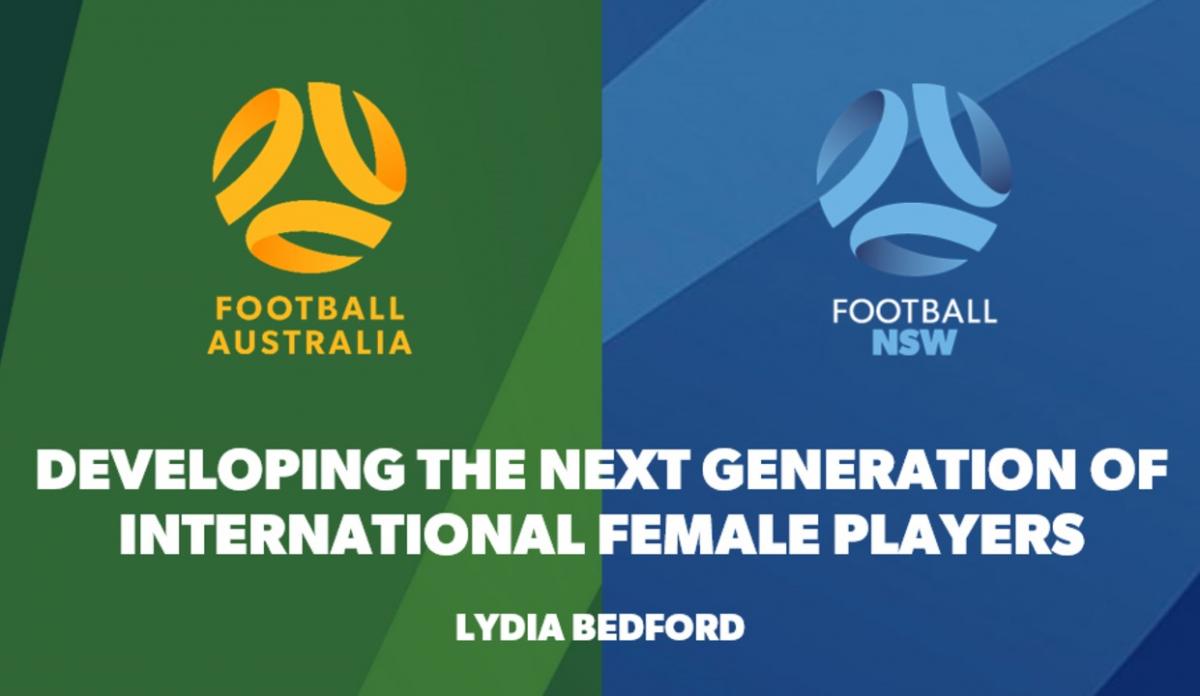 Developing the Next Generation of International Female Players 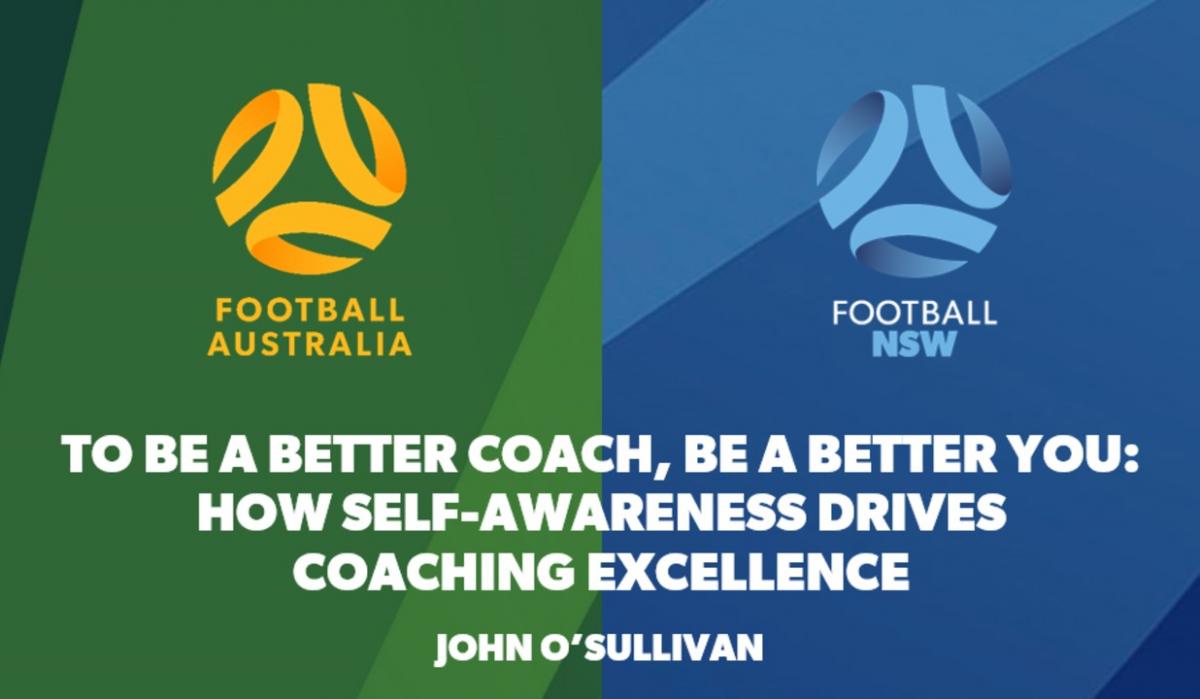 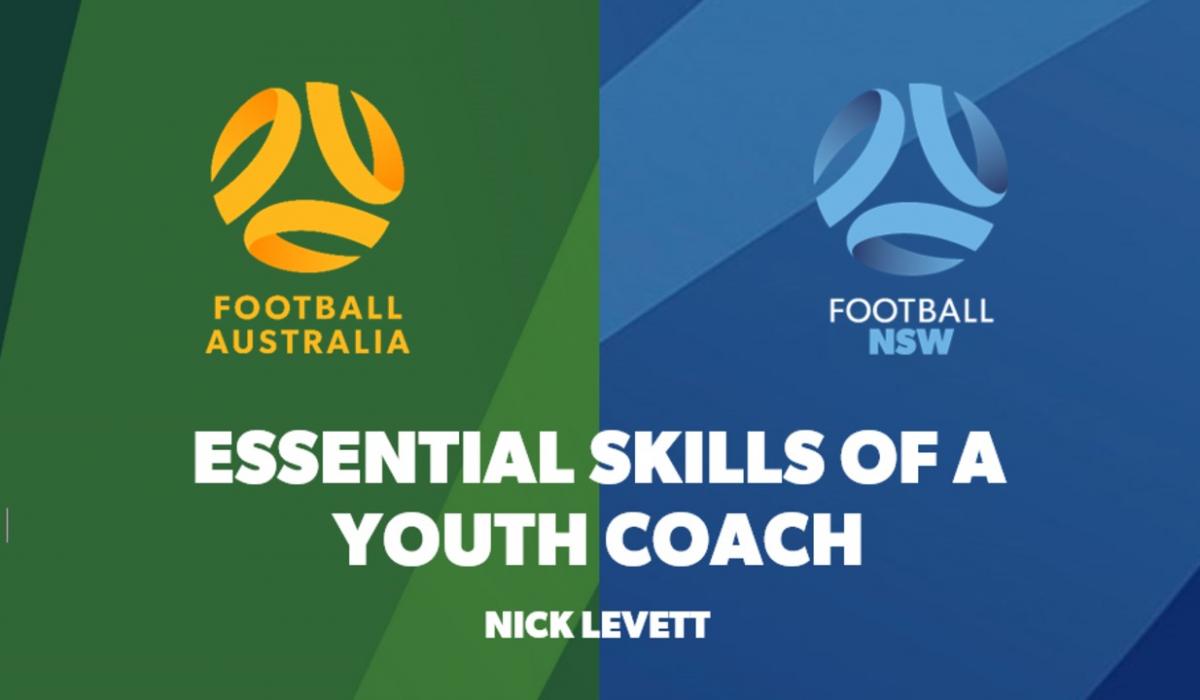 Essential Skills of a Youth Coach 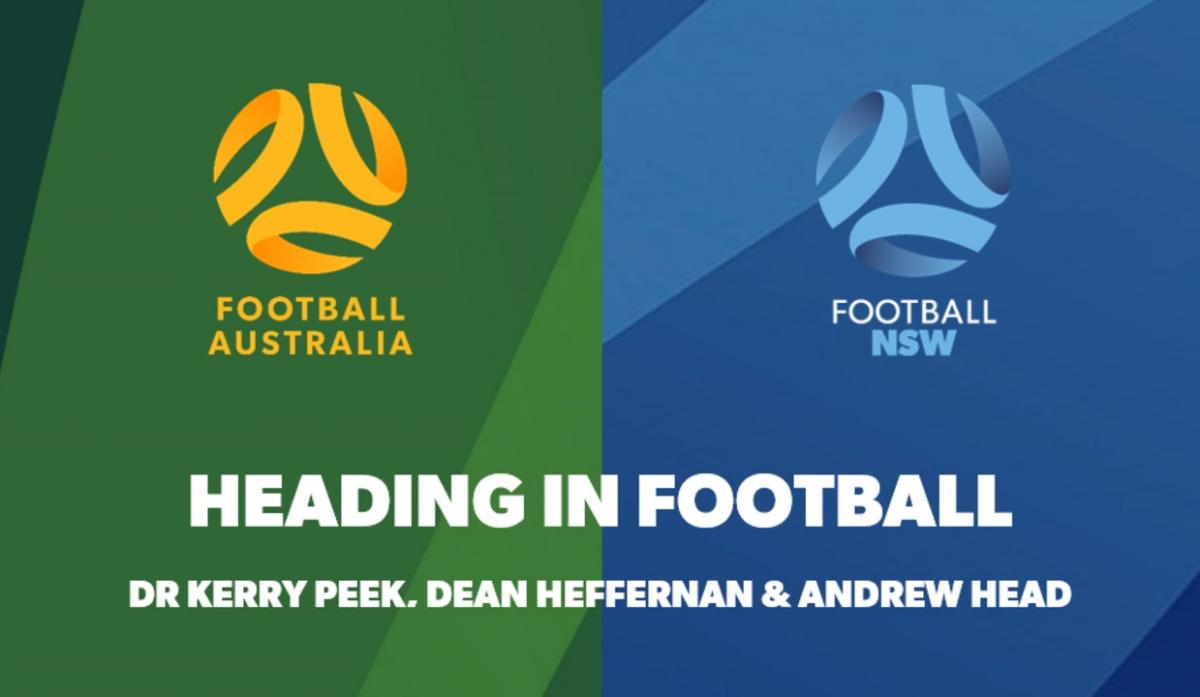 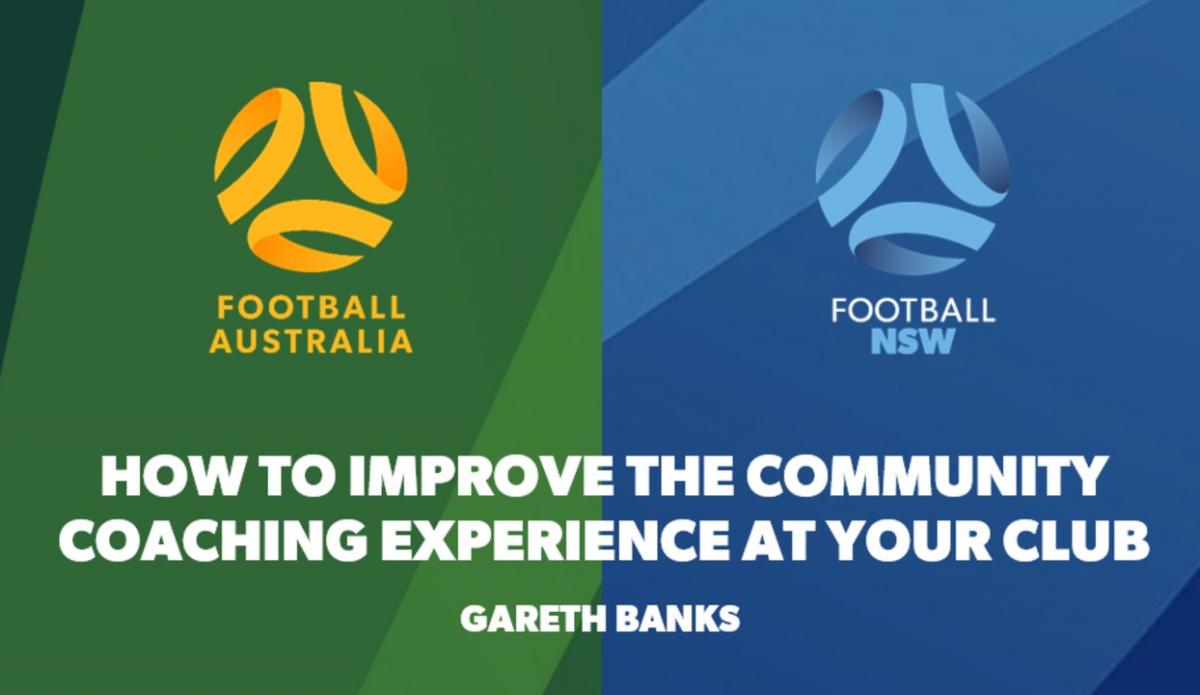 How to Improve the Community Coaching Experience at Your Club