How can you design a session that enables tactical creativity? We all want our players to be decision-makers and to find the answers. Swedish based Coach Educator, Mark O'Sullivan discusses session design for deliberate learning intent that enables players to find tactical solutions.

The player is one part of a dynamic system. The system is compromised of the game/training environment, the task, constraints and the interactions of players in attack, defense and transition. The player acts in context. This dynamic context creates information that needs to be perceived. Therefore, it is important to train the perceptual and action systems of young players together. What information sources are designed in to practice is of the utmost importance.

Training sessions should be deliberately designed for young learners to learn how to play with purpose. In other words, to play with a deliberate “learning” intent. The training design is deliberately flexible, allows for the manipulation of task constraints and affords various actions for the young player. Skill emerges as a solution to the problem in that moment.

We need to design training sessions that allow for a variation of solutions to emerge as opposed to the same solution being repeated time and time again. It is vital that the training environment reflects the performance environment

Design a task that simulates an aspect of the performance environment. 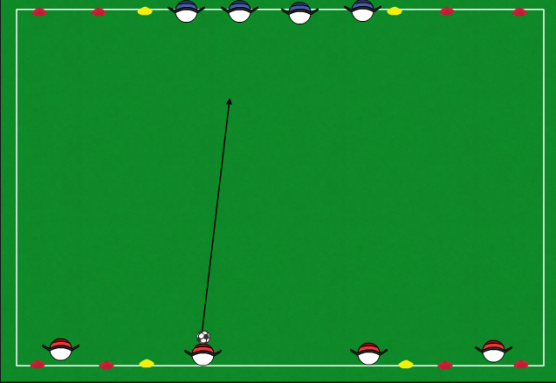 The game starts in this case with Red playing the ball to Blue (Note Red have width and Blue are compact). The red team then move up-field in an effort to win the ball.

How does the Blue team behave when they receive the ball?

How does the Red team behave when the Blue team receives the ball?

I let the young players play the game for about 10 mins and then called them all in for a quick discussion and to show them two photos that I took with my mobile phone.

This photo was taken at the start of the session. The blue team have received the ball and the red (orange J) team have collectively moved up field to try and win the ball.

The blue team found it easy to identify a gap to pass the ball through to a player making a run in depth behind the defensive line.

I felt that while at times some players may have been correct with their individual actions they rarely acted collectively to solve the problem. I asked the players to quickly analyse the photos and to come up with some suggestions as to how they can use collective and individual football actions to prevent their opponent from scoring. We first placed a particular focus on the actions of the team as they moved up-field to try and gain possession of the ball.

·         When the opponent receives the ball and we have collectively moved up-field ensure that there is defensive balance, stability and we are also prepared to deny space behind us. (Do we hold and organise or do we immediately press?)

·         The defender nearest to the player in possession presses. What information does this player communicate to his teammates with the decision how the pressing action is carried out? How do the other defenders react to this to maintain the defensive balance?

The movements of teammates and opponents provides information that drives our own movements. For instance, players can communicate and share information with each other verbally or non-verbally. Isolated drills can lack the inter-individual communication of essential information This session also uses the principles of co-adaptability at the scale of performance and learning. What defenders do impacts on what the attackers do and what the attackers do shapes what the defenders do. The coach can try and 'nudge' the young players in to constantly trying to adapt new ways to counteract new strategies that opponents are introducing in to the game.

Football Actions are Underpinned by:

·         Football is a game of constant decision making based on communication/information. Every “football action” involves a decision.

A recent blog (see here) hosted on the inspiring Player Development Project homepage, by the excellent Todd Beane coincidentally refers to a similar idea that I have been using while giving coach education courses here in Sweden. When the topic of skill acquisition and training environment is been discussed I write the 'football action' points below on a whiteboard and I ask the coaches which one of these do players use the most during a game.

The unanimous verdict is 'decision'. We are also in general agreement that players are constantly making decisions during a game (both on and off the ball). So why remove it from training? This is also echoed in the ideas of innovative Swedish goalkeeper coach Maths Elfvendal who promotes a more integrated approach to goalkeeper training.

Football is a game of constant decision making based on communication/information. Every training session should have as many aspects of football as possible. The aspects used should interact and should also influence each other.

"There’s only one moment in which you can arrive in time. If you are not there, you are either too early or too late" - Johan Cruyff

ABOUT THE AUTHOR:
Mark O’Sullivan is a UEFA A licensed coach based in Stockholm, Sweden. Mark delivers coach education courses and has run many youth social projects, has his own blog – Footblogball – and he coaches at AIK FC.  Mark is a regular contributor to Player Development Project magazine and has featured in our Masterclass Webinar series. Mark’s currently working on his book, ‘Coaching the Learning Game’ and it will be due for release soon.