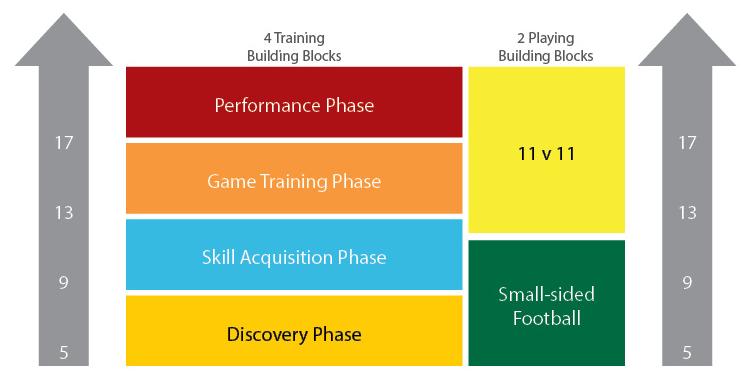 The FFA Building Blocks Methodology is the framework that provides practical guidelines for coaches working at all levels of youth development in order to help them in answering questions such as:

With the aim to:

The result of this approach must be future generations of players with the skills and habits to make Australia a successful contender on the World stage, both in men’s and women’s football. Does the Building Blocks methodology guarantee we will develop the next Lionel Messi in Australia? Unfortunately the answer is no, but this structured approach will certainly increase the chance.

No top performer has ever circumvented these rules! This doesn’t mean however that geniuses do not exist. The top teachers and coaches Daniel Coyle interviewed for his book “The Talent Code” pegged the genius rate (Messi!) at about one per decade.
Let us take a closer look at these insights.

If talent is not innate and excellence is the result of many years of sustained deep practice does that mean that anyone can become a top level player? Theoretically yes, although it’s not that simple.

Many people may have heard of the so-called “Rule of 10,000 hours”. This rule, introduced by the Swedish scientist Anders Ericsson, basically states that it takes 10,000 hours (or 10 years) of practice to reach a level of excellence in sports, science, art or any other field.

It is apparent that the quality of that practice is vital although, interestingly, research conducted by UK professor Mark Williams shows that time invested in non-organised practice, such as playing with mates in the park or juggling a ball in the back yard, is at least as important.

Quality of practice is clearly contingent on the importance of good coaching. Good coaching means purposeful practice and quality feedback.

Purposeful practice is always aimed at progress: after all, only by working at what you can’t do will you turn into the expert you want to become. And quality feedback is the rocket fuel that propels learning. Without it, no amount of practice is going to get you there because “if you don’t know what you are doing wrong you can never know what you are doing right”. Good coaches are therefore able to design practice so that feedback is embedded in the exercise, leading to automatic adjustment.

A GOOD WAY OF VISUALISING WHAT ‘PURPOSEFUL PRACTICE’ MEANS IS TO PICTURE SOMETHING ‘JUST BEYOND THE PLAYER’S REACH’ OR ‘JUST OUTSIDE SOMEONE’S COMFORT ZONE’, SO THERE IS A CHALLENGE BUT NOT ONE THAT IS TOO DIFFICULT.

Intrinsic motivation means that the player has developed a true passion for football and the motivation to become the best they can be comes from deep inside.
The chance of developing a passion for football is of course greater when you grow up in an environment with a real football culture, where you have role models and more and better opportunities. That is why developing a real football culture is so crucial for Australia.

It’s also important to realise that it is impossible to ‘impose’ motivation.
Pushy parents or coaches will achieve nothing (or the opposite of what they are looking for) if it isn’t the player’s own choice.

However if the motivation is intrinsic, the effect is very powerful.
One of the differences between good performers and the very best is that top performers are able to “push themselves harder for longer” because their motivation level is higher.

Intrinsic motivation by itself however is still not enough, for only sustained motivation leads to excellence.

A prerequisite for sustained motivation is what Professor Carol Dweck calls a ‘growth mindset’, which basically means that mistakes are embraced and deficiencies confronted (“I can master this, I just have to practice harder”)
This mindset sees a setback as a motivational factor.

The opposite is called a ‘fixed mindset’; for those people, failure is a de-motivator (“I will never be able to do this, I just don’t have the talent”)

HERE, IT IS ALSO WORTHWHILE HIGHLIGHTING THE FACT THAT COACHES ALSO HAVE FIXED OR GROWTH MINDSETS, WHICH CAN AFFECT THEIR OWN DEVELOPMENT AS WELL AS THAT OF THEIR PLAYERS.

A growth mindset is a characteristic shared by
most top performers

How can a coach or parent stimulate the development of a growth mindset in players?

“FAILURE IS A GREAT OPPORTUNITY FOR IMPROVEMENT”

To bring all of the above to life, FFA has developed the Building Blocks Methodology, outlining the logical and progressive steps necessary to achieve our long term goals.

For example, although the focus in the Skill Acquisition Phase is on individual skill development, the player’s tactical insight is being developed at the same time, but using the ‘hidden learning’ approach. The coach uses training exercises which involve as many of the game-specific resistances (team-mates, opponents, direction, goals, etc) as possible, so that game awareness is automatically developed, rather than trying to ‘coach tactics’. Equally, technical development doesn’t stop at the end of the Skill Acquisition Phase; it continues throughout the Game Training and Performance Phases, although it is now not the main focus.

DEVELOPMENT OF TACTICAL INSIGHT DOESN’T SUDDENLY BEGIN IN THE GAME TRAINING PHASE; IT IS DEVELOPED DURING THE SKILL ACQUISITION PHASE IN SMALLER, SIMPLER SITUATIONS. HERE, THE PLAYERS ARE INTRODUCED TO THE FUNDAMENTAL INDIVIDUAL AND TEAM TASKS THAT FORM THE FOUNDATION OF DECISION-MAKING IN THE 11 V 11 GAME. 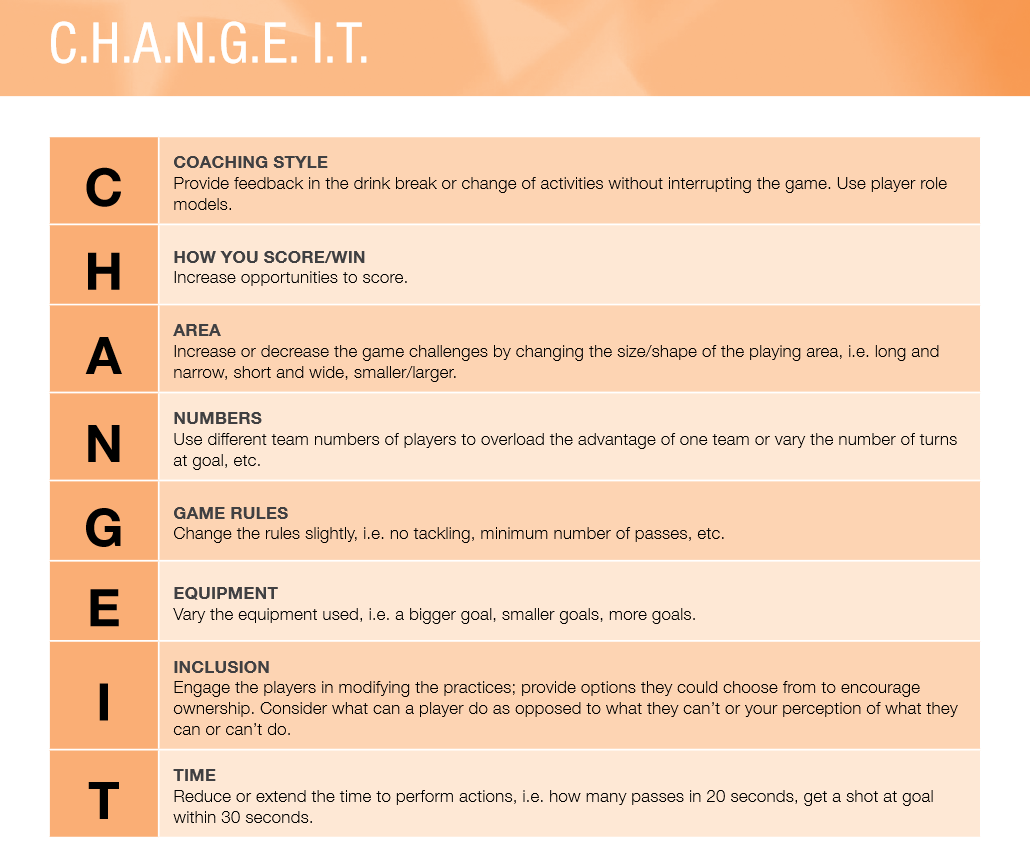