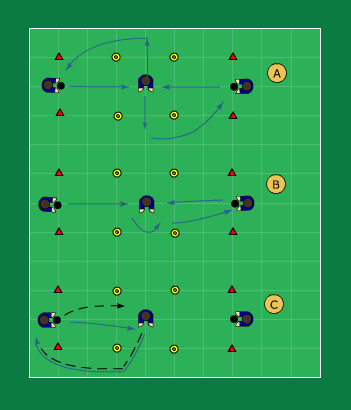 Players in threes, positioned as shown. Both players at the sides with a ball; the player in the middle stands in a 2m x 2m grid without ball.

Variation 1. The exercise starts with a player on one side passing the ball to the player in the grid. They must move the ball with their first touch side-ways out of the grid and pass it back with their second touch.

Then they receive the next ball from the player at the opposite side, etc. (see variation 1) Rotate positions after 10 repetitions. Use various techniques i.e. right/left foot only; inside/outside foot only.

Variation 3. The outside players follow their pass, sprinting to the left or right cone of the grid. The player in the middle must now move the ball out of the grid in the opposite direction with their 1st touch and dribble the ball to the empty cone. The new middle player now receives the ball from the other end and the pattern is repeated.

Competition. Start a race between groups. Come up with different variations or ask the players to develop one with you. 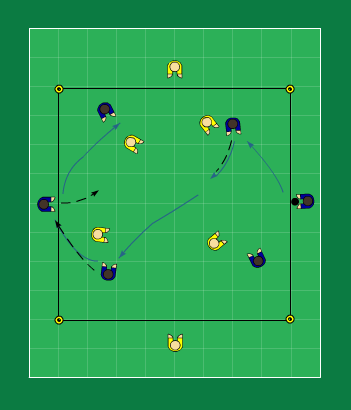 Players look to play forward to their team’s free player (bouncer) on the outside. Play continues and the team in possession look to score at the other end again. Look to encourage outside players to take their touch into the area so they can swap with a player on the inside if they deem it to be the right moment to do so.

Consider adjusting the rules of the practice to ensure the players 1st touch is being trained at an appropriate level of resistance for the players. You could look at adjusting the area to make it smaller as an example. If you have uneven numbers, use a joker in the middle who plays with the team in possession. 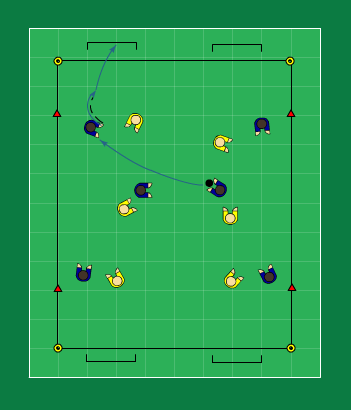 Organise 2 teams. Teams should look to get a player into a position where their team mate can take their 1st touch into the scoring zone to finish in either of the 2 goals. You could reward teams for scoring by allowing them to retain possession again. Depending on the success of either team, look to consistently manage the resistance of the practice/game to ensure 1st touch is being trained under pressure.