Are we beating them into a system?

Systems tend to dominate organisational thinking in the modern age. So how do these systems potentially harm player development and participation? Co-founder of myfastestmile & regular PDP contributor, Mark Upton discusses the dangers of a ‘mechanistic’ approach to sport and the risk we run when working to a one-size-fits-all approach.

Amongst a long and enjoyable conversation with a colleague involved in rugby last week, there was a somewhat sobering moment. He intimated his love for the game, evident since early childhood, had eroded to the point he didn’t really enjoy watching the game anymore.

The reasons for this are reflected in an anecdote from Ed Smith in this article.

“A friend of mine, a fly-half in professional rugby union, retired from the game when his coaches told him exactly which decisions to make in the first six phases of every attacking move. In effect, they banned him from playing creatively; they wanted rugby by numbers.”

“I’m involved in surfing. The ‘template’ style of coaching is exactly analogous and I agree with Trent 100%.

Australia has the best baseline talent in the world of surfing, by far. But because it is such a big sport, the over-coaching is way, way over the top. Basically, in a subjectively judged sport every naturally talented, elite kid is having their evolved techniques pulled down and robotically rebuilt to emulate Mick Fanning. Now…Mick is a legend, however the sport (a bit like batting) is about flow and feel as much as it is about robotically obeying a fixed technique template.

The result in surfing is that Aussies routinely dominate the quantities of top pro surfers, but don’t dominate the top 5 or World Titles. Why? Because the X factor(s) that separate the elites from the World Champs are being ‘smoothed out’ or coached out of the natural talent. Brazilians have risen to the top because they’re not having their instincts coached away. Most young Aussie surfers on tour rip (of course) but they don’t stand out from one another. Same styles, same boards. Same everything. And they don’t take enough risks under pressure. Totally over-coached. Analysis Paralysis.”

This surfing example makes for an interesting case study. The results – good, solid performers but not world-class – are what one might expect from a mechanistic, “one-size-fits-all” approach to performer development.
I remember listening to Ron Smith on a podcast a few months back talking about Brazilian football. His perception of the direction things have gone in that country suggest similarities with Australian surfing.

In rugby, surfing, cricket, football and many other sports…why do we try to exert excessive control and butt heads with what may well be a natural order? Perhaps, similar to the gardener trying to understand a forest, we mistakenly see anything that doesn’t fit our linear mechanistic worldview as in need of fixing. For a period of time on my learning journey in sport I was the gardener who could not see the natural organisational dynamics of the forest…

Take for example the forest, for a gardener, a forest may look chaotic. But no, there is a very deep order in this chaos and a forest will live for millions of years while a garden will not last for a month. What people think is chaos is because they have an external view of things, not an internal, integrated view of that. If people actually understand an ecosystem, they will know it is in order because it is the only thing that lives for a million years. When we say chaos, something that looks chaotic is not necessarily so. Simply because you have a linear mind and something doesn’t fit into your straight line, you think it is out of order. You know, you have to harness different people instead of trying to beat them into one system. – Sadhguru Jaggi Vasudev (source) 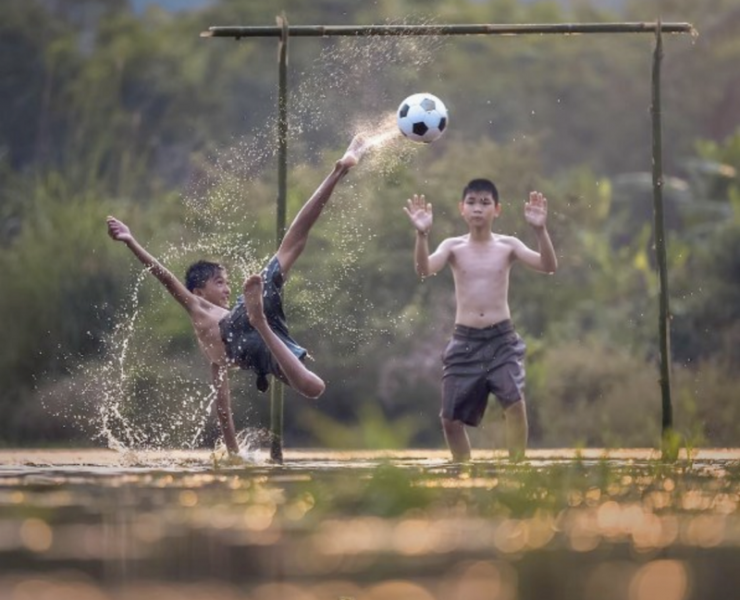 I love this picture of a football ecology, with the creativity Ed Smith wrote about on display (yes, the strike, but also the design of the “goals”).

These kinds of images can be a useful stimulus for discussing assumptions and world-views of coaches and sport leaders, revealing alternative lenses and hopefully leading to fewer stories of people falling out of love with sport.

Mark is co-founder of myfastestmile and is one of the UK’s top coach education researchers. Mark has been an active supporter and top contributor to Player Development Project since PDP inception.

Photo by Max Böttinger on Unsplash