PDP Technical Advisor, Dan Wright examines one of the greatest midfield players to ever play the game, outlining why a long term view to player development is essential to ensuring every player has a chance to fulfil their potential and more.

He doesn’t look like a footballer. He’s too small, too weak, he can’t move.

It’s a warm May evening. As you approach the ground the traffic gets heavier and fans start to fill the streets: a kaleidoscope of blue, red and yellow everywhere you look. People of all ages and all backgrounds unified by their love of their football team.

As you climb out of the taxi you turn the corner to see the stadium, the huge dull grey structure of concrete and steel seems to fill the skyline. As the kick-off approaches, the numbers swell, and 90,000 people start filling the turnstiles to take their seats.

After lengthy negotiations with the locals,  you and your friends finally get settled for the main event. The atmosphere is almost tangible. As the teams are confirmed over the tannoy, the fans finish every name the announcer starts, but as he moves through the team there is one name that gets an even louder cheer.  “Andrés…” the crowd reply with emphatic “INIESTA!!!”

The players enter the arena and the anthem starts, while the stadium is transformed into a huge mosaic to honour the Barcelona number 8.

Iniesta from coachdanwright on Vimeo.

Last month, I was lucky enough to experience this occasion. After months of speculation, the 34-year-old Andrés Iniesta was finally leaving Barcelona.  After a career spanning 22 years at the Catalan club yielding 32 trophies, it was time to say goodbye. I have always been a huge fan of Iniesta. In my opinion, he is one of the greatest players of modern times and a player that embodies Barcelona’s and Spain’s style of play.

But this isn’t another piece to tell you how good he’s been – there’s loads of those and, let’s be honest, we all know. 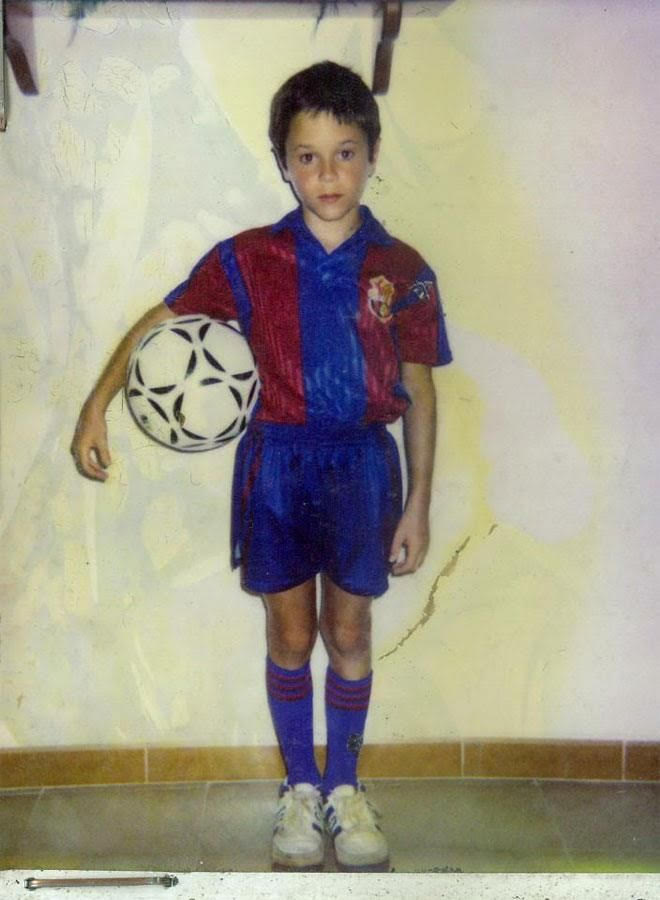 As someone with a passion for youth development, this got me thinking. If you saw this player as a young child would you want him in your team?

Does he look like he has the potential to be one of the best footballers to ever play the game?

Iniesta has been with FC Barcelona since 1996, when as a 12-year-old boy he was spotted by scout Joan Martinez Vilaseca and convinced to swap first club Albacete for the ‘Blaugrana’.

“We discovered him during the Brunete tournament, Albert Benaiges was our youth team coach and he alerted us about Iniesta, we began to work and we came to see him” the scout, who worked as the right-hand man to the legendary, late Barca talent-spotter Oriol Tort, explained.

“He had amazing technical skills, he was very fast making decisions and had incredible vision; he had everything we look for in young midfielders.” Note the checklist, it doesn’t focus on his physical attributes: power, pace and size. In a time where football has become quicker, players are taller and more athletic –  there was room for “El Ilusionista” (the Illusionist).

“I don’t see football as sport for people who are 1.80m and 75 kilos. I never got intimated. I always enjoyed playing against older, bigger boys.”

Back in 1999, Guardiola was captain of Barca and had been joined in the dressing room by a young player called Xavi Hernandez.  At this stage, Xavi’s talent was no longer a secret, he had been identified as the next in line, the next graduate to make the grade.  However, in the youth ranks at La Masia, another talent was emerging. And this one, Pep predicted, would outlast them both.  After observing a 15-year-old Iniesta in action in the Nike Cup, Guardiola turned to Xavi and said: “You will retire me, but this kid will retire us both.” And later, he presented a shy and starstruck Iniesta with the winners’ trophy.

Fast forward 22 years and Iniesta is the most decorated Spanish player of all time.  He has won every trophy there is to win with both club and country, playing some of the most mesmerising football ever seen.

To offer a balanced view, it’s also worth considering just how exceptional Iniesta is.  His absolute mastery of the relationship between space and time.

“I think Paco defined him perfectly,” Guardiola says. Paco Seirulo was Barcelona’s former physical coach, the man from whom Lorenzo Buenaventura learnt; now Guardiola makes Seirulo’s description his own. “Andrés is one of the greats. Why? Because of his mastery of the relationship between space and time. He knows where he is at every moment. Even in a midfield where he’s surrounded by countless players, he chooses the right path every time. He knows where and when, always. And then he has this very unique ability to pull away. He pulls out, then brakes, then pulls out again, then brakes again. There are very few players like him.

“There are footballers who are very good playing on the outside but don’t know what to do inside. Then there are players who are very good inside but don’t have the physique, the legs, to go outside. Andrés has the ability to do both. When you’re out on the touchline, like a winger, it is easier to play. You see everything: the mess, the crowd, the activity is all inside. When you play inside, you don’t see anything in there because so much is happening in such a small space and all around you. You don’t know where the opposition is going to come at you from, or how many of them. Great footballers are those who know how to play in both of those environments. Andrés doesn’t only have the ability to see everything, to know what to do, but also the talent to execute it; he’s able to break through those lines. He sees it and does it.”

Frequently we hear people discuss concepts like late maturers, relative age effect, bio banding, the need to be patient and resisting the urge to try and predict the future. These are really important topics, but they can be much more difficult to “walk the talk” at the moment when teams or individuals are struggling.  This can lead to coaches making snap judgements like “he doesn’t look like a footballer. He’s too small, too weak or he can’t move.”  This can lead to the biggest, strongest and earliest athletes being identified and held up as elite at ridiculously young ages. Iniesta is a ‘real life’ example, asking us to consider that not every player looks the same, not every player’s journey is the same and there are different ways to get success.

He doesn’t look like a footballer and for that, we should all be thankful.

“I need to thank him because he helped me to understand the game better – just watching him, what he does on the football pitch.”

The Artist: Being Iniesta – Andrés Iniesta

About the Author: Dan Wright, is a UEFA A and FA Advanced Youth Award holder. He is an academy coach, PDP Technical Advisor & blogger with experience working at grassroots level through to professional academies in the UK & Africa.