Observe and Adapt: A Complex Systems Approach to Coaching

Self-organisation was a key process discussed at the Complex Systems in Sports Congress at Camp Nou in Barcelona. PDP co-founder James Vaughan discusses the importance of understanding and observing self-organisation with video and reflections from Barcelona and Sweden.

It was the end of the day and that meant free play. However, this freedom felt very restricted, very one-directional, very narrow. It was almost as if the players had blinkers on; constrained to only see forwards.

It was an eternity (in reality about 10 minutes) before anyone attempted to pass the ball, never mind completing a pass.

I was standing next to Martí Cifuentes, it was April and we were shivering as we watched a group of kids, born around 06/07, playing football at a holiday camp in Stockholm. Martí is a UEFA pro licence coach from Catalonia who now coaches at AIK, he is an admirer of total football and a graduate of the Cruyff Institute masters program. At this point in time, I’d just arrived in Sweden after a year studying the style of play in Barcelona; with many a weekend spent watching the youngsters at Ciutat Esportiva Joan Gamper (FCB’s academy, also called La Masia).

Whatever these kids were playing it did not look like the football we were used to! Was this even the same sport?

During the whole game, there was not one switch of play, not one. I could have counted the number of sideways or backward passes on one hand. The game was almost completely one dimensional. Everything was vertical; in fact, everything was forward.

Few players, if any, appeared aware of the width available or space in general. They were attracted to two things: the ball first and then, when they had that, the goal in front of them. Simple, linear, efficient; some would say this is very Swedish?

Perhaps this is all part of the Swedish ‘form of life‘? (Video explainer)

The teams self-organised around these principles and the pattern of play emerged to represented this. It was high octane ‘bees around honey’ football. 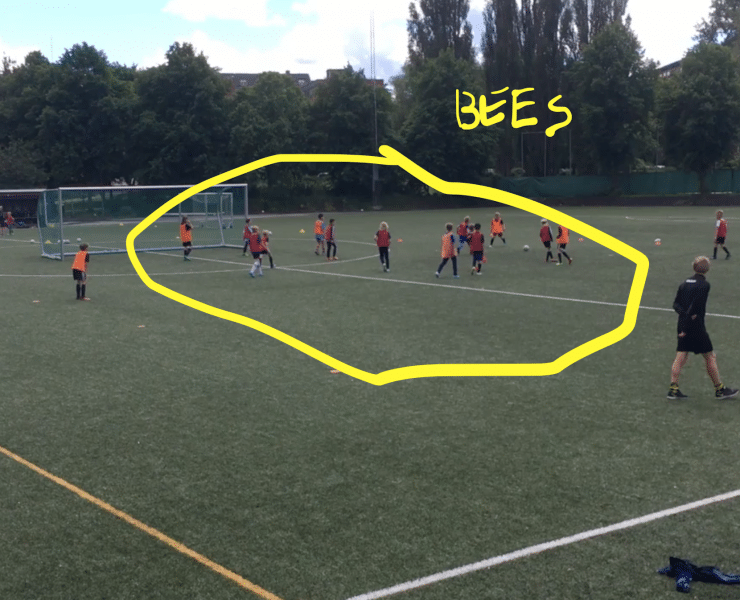 The challenge is how to change this using appropriate pedagogy.

You can’t tell kids to ‘stand in space’

I remember being 7 years old (1992 in Nottingham, England) when my dad pulled me aside (during a rare SSG) at the end of an FA Skills ‘training session’. Dad said: ‘Stand out wide, in space…the ball will come to you if you stand in space.’ I looked at him in utter disbelief! I’m 7 years old and my dad’s my hero, I want to make him proud, but seriously…he is asking me to isolate myself from the fun!

Firstly, being an avid participant in these games at school I knew the modus operandi, I knew what they were all about: me and the ball, go for the ball and if you get it, go straight for goal, dribble or shoot! That’s where the glory is, why would I stand out wide? I may as well sit on the bench or go home…

What I knew as 7-year-old I sometimes forget when I coach. No-one on that pitch had any intention of standing out wide because no-one had any intention of passing, let alone passing anywhere but forward. A vicious cycle had self-organised around these simple attractors; first the ball, then the goal.

As Martí and I were witnessing a similar dynamic play out in Stockholm’s cold climate, we tried to figure out how to break this cycle without killing the fun. On this occasion, nothing seemed to work. While beehive football is accepted at young ages, the group Martí and I were observing were old enough to be aware of other options.

The real problem is that beehive football is not ‘representative’ of the game. It doesn’t look like football because the spatial-temporal relations aren’t realistic. In other words, the time and space between players results in a desolate landscape of affordances with few emerging opportunities to successfully pass or dribble.

At times I wonder if this disregard for others is an emergent feature of a cultural inclination towards rampant individualism? Or is it simply kids at this age? But kids share toys with each other, right? In Catalonia, even the youngest kids (Pre Benjamín) are aware of their teammates, and this is evident in their willingness and ability to share the ball. They have the intention to pass.

Historically Sweden has succeeded as a welfare state, built on socialist ideals of equality and diversity. But this isn’t evident in the way kids play football; in this instance, they didn’t share the ball or explore diversity manifested as different skill or tactics. This looked more like selfie football.

Simon Critchley, the English philosopher, argues that association football is, at its core, a socialist game, and DJ/philosopher Mark O’Sullivan’s recent work suggests that football interactions are founded on social coordination. Football requires an awareness of others. It is inherently a social game which flourishes in social conditions, conditions within which great coaches like Bill Shankly, Brian Clough and even Sir Alex Fergason were bought up.

What does this mean in practice?

The question becomes: how do we facilitate awareness of others to create representative spatial-temporal (time and space) relations and team coordination with 10 and 11-year-olds?

First, we must understand our sociocultural context and observe the emergent patterns of play and players’ movements emerging from the ‘form of life’. For example, if you’re coaching in Catalonia you probably won’t design a session to promote width because when you observe the young players it becomes evident that they’re already aware of wide spaces and are using them. Instead, perhaps they need to become attuned to gaps to pass or dribble forward.

Second, we must create situations that require players to collaborate and self-organize around a challenge that shifts patterns of play and player movements/ubication towards interactions that are more representative of the time and space in more skilled versions of football. Below is an example.

Below is a video of the June holiday program, the group playing are very similar to the April group mentioned above. It is a mixed ability group, they haven’t played together before and they’re in the final hour of a six-hour holiday camp.

In this example, we coaches were hoping that players would become aware of wide spaces and move away from the ball while being in a position (ubication) to receive a pass, and then, we hoped, opportunities to switch the ball would emerge. But we didn’t say any of this to the players! We just gave a simple constraint.

In the video the constraint (challenge) the teams are attempting to self-organise around is: The ball ‘must’ enter both wide zones before you can score.

To educate players’ awareness toward the rich landscape of affordances in football, in Sweden, with this particular group, in this particular moment (of a holiday camp), with this number of players and this space – this constraint worked. Mark O’Sullivan and I still discuss the potential pitfalls. However, on this occasion, for me, the video is evidence that this constraint facilitated beneficial self-organisation and emergence of a more representative affordance landscape. In other words, it started to look like football!

Credit to the coaches who had the patience and skill to simply observe and create the space for the players and teams to self-organise. Also, credit to Mark who created an environment whereby coaches are encouraged to experiment with non-linear pedagogy.

This is not a one size fits all / silver bullet constraint, though. Don’t expect to see the same results in your context. Your players will self-organise in relation to the unique context (and form of life) they are in. I’m not advocating these particular constraints as best practice, just showing that they worked in this context.

As Mark Upton says: ‘Local perturbations to the system create global change.’ The perturbations, or system probes, in this case are the rules and constraints, but one of the key factors of change was time. Players and teams were given time to figure things out for themselves, self-organise and evolve the patterns of play.

Learning in the game, not about the game

For me, the video above is a great example of creating the context, ecology or niche for learning in the game. It’s also a great example of how video can help us observe the team’s evolution as a system that displays self-organisation.

If my dad had known then (when I was 7) what he knows know, he wouldn’t have ‘told’ me to stand out wide. As we know now, if you want to foster skill and nurture creativity, you can’t simply tell young players (I’d say any players) what to do. If you understand constraints and are skilled in session design and questioning, you don’t need to command; football interactions and positional movements will emerge through self-organisation.

Coaching is not commanding. It’s about creating an environment where interactions, patterns and team synergies emerge and evolve. This is about designing sessions that meet a broad spectrum of  needs (psychological, social etc.) and afford movement opportunities based on information that is representative of the game.

According to Professor Keith Davids, the video: “Shows some good points for youth coaches who may think that you need to verbally intervene and instruct all the time.”

He continues: “Impressive! No actual verbal interventions from coaches shown, but the constraints clearly do the work in guiding the micro-decision making of the children…for example, their orientation to the ball and teammates, movements away from the ball rather than being drawn towards it.

“The lifting of the constraints was well-timed and the invitation to score ‘3’ goals by moving the ball wide onfield was smart too…because now defenders could not anticipate where the next move was going to emerge as quickly as before. Scoring 1 goal was also an opportunity that attackers learned to exploit. So it was a good learning experience for the attackers to not move too quickly to block space out wide onfield.”

*Professor Keith Davids is Professor of Motor Learning at the Centre for Sports Engineering Research (CSER) at Sheffield Hallum University where he leads the Skill Acquisition theme. His research programme in ecological dynamics investigates constraints on coordination tendencies in athletes and sports teams classed as nonlinear dynamical systems. Ideas from ecological psychology and nonlinear dynamics have been integrated into a book called Nonlinear Pedagogy in Skill Aquisition.

James Vaughan is a Co-founder of Player Development Project and currently based in Stockholm where he is coaching at AIK and working towards his PhD in Creativity & Motivation in Football.

Photo by Mosa Moseneke on Unsplash