How do you decide what coaching practices to deliver? And what process do you follow when designing the practice? FA Senior Youth Coach Educator and regular PDP contributor, Ben Bartlett shares an article from Hive Learning which provides steps 1 and 2 of the 6 stage process he uses to design effective coaching practices.

“We must help coaches understand and rationalise why they coach and behave in the way they do rather than settling for mimicking others”.

With clubs and coaches dedicating significant amounts of time devising and defining playing and coaching philosophies it is crucial that the importance of effective practice design as the vehicle for these philosophies to be delivered is not lost.

In my experience of coaching and coach education, I have witnessed many examples where the design and delivery of practice is based on imitation rather than any individual reflection or reasoning.

If, however, we are going to be successful in achieving The FA’s stated aim of developing more innovative coaches who are excellent teachers of the game we must instead help coaches understand and rationalise why they coach and behave in the way they do rather than settling for mimicking others.

Step 1: Base your work on research

Before we begin to design practice sessions, it is important to be informed by the latest research, giving us sound reasoning for making the decisions that we do.

Professor Mark Williams, skill acquisition expert at Brunel University, has proposed that the practice experience of a developing young player over a period of time could be constructed within three elements:

Deliberate Play may include

These are done for the inherent fun of playing. Try to limit/eliminate interventions.

Individual Practice may include

Team Practice May Include

If we accept this model, it may be helpful to be considerate of the ways in which we plan, record and apply this over an entire development journey and how this may translate to each season, each block of work and even each individual session. This approach can provide a reference point for our longer term planning and support us to structure our coaching sessions, ensuring each session and period are one page or chapter within a cohesive, longer story.

Step 2: Have a Practice Philosophy

In edition 6 of The Boot Room the concept of Teaching Games for Understanding was discussed and in edition 8, the focus was on Skill Development. Returning to these concepts and the relevant underpinning evidence forms the basis for my own practice philosophy.

The following four ideas are the guiding principles from which I structure my practice:

The design of the practice should allow the teams or players to attack to score in a particular direction using some kind of ‘goal’. The focus for the players may be a traditional goal, an end zone, a target player or another type of target point. Designing practices in this way ensures the principles of attack and defence remain fundamental to the practice.

Directional practices which are based on these principles don’t necessarily need to be opposed, as shown in the diagram below. In this practice example, both teams can use combination play across and between each other providing interference without a threat to the ball. This example also includes mannequins through which the players look to find their target player. 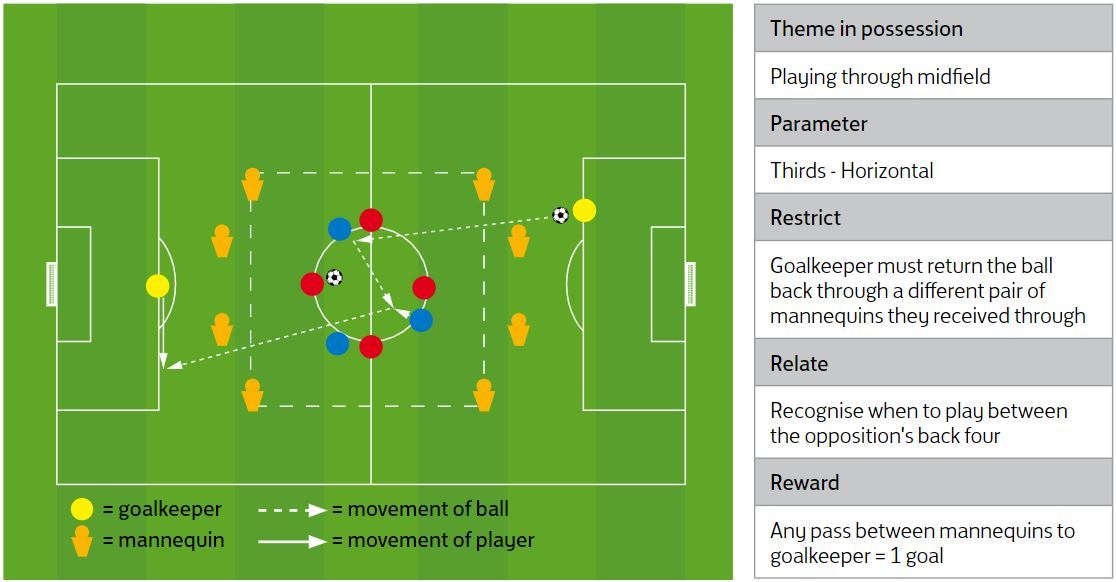 A practice should be constructed within the area of the pitch that it would likely occur on a match-day. For example, if the session theme was playing through midfield, (see above) the practice would be delivered in the midfield area of the pitch, if the session was defending around the penalty box, the set up would be constructed around the box and so on. This approach helps the practice have a visible link to the game of football.

Within the practice the players should have a cognitive challenge with decisions to make, problems to solve, triggers to read and situations to perceive. By building these ingredients into a practice the execution of any technique is coupled to some kind of visual trigger such as the movements and decisions of the opposition or teammates.

Practices should provide opportunities for players to practise the session theme in a range of varying circumstances such as running with the ball over both short and longer distances. Additionally, the practice should allow the players to practise different themes within the same practice, for example Josh practises marking and intercepting whilst James practises passing forward.

Whilst these four things aren’t strict rules that coaches must apply to their work, there is a clear rationale from which, in principle, a coach can apply to practice.

Ben Bartlett is a FA Senior Youth Coach Educator & UEFA Pro License holder working with coaches and players in academies and centres of excellence. Ben’s previous roles include FA Regional Coach Development Manager for the East, Technical Director for Women’s and Girls’ football at Chelsea FC and nine years in a range of coaching and development roles at Colchester United.